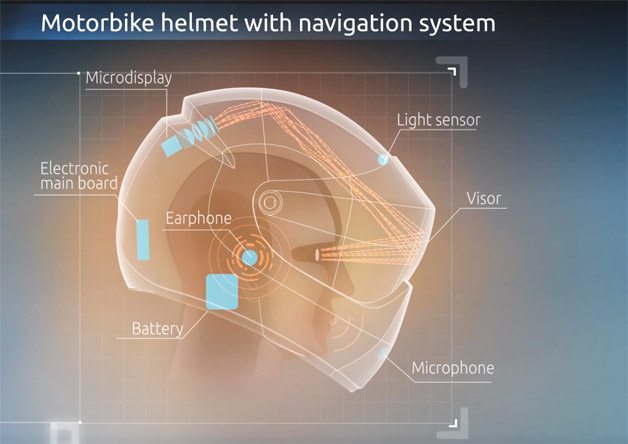 An ingenious new type of motorcycle helmet has been developed by Russian start-up company, LiveMap. It is hoping to raise US $150,000 by July 12 through crowd-funding site, Indiegogo in order for it to be able to bring the state-of-the-art helmet to market by August 2014. 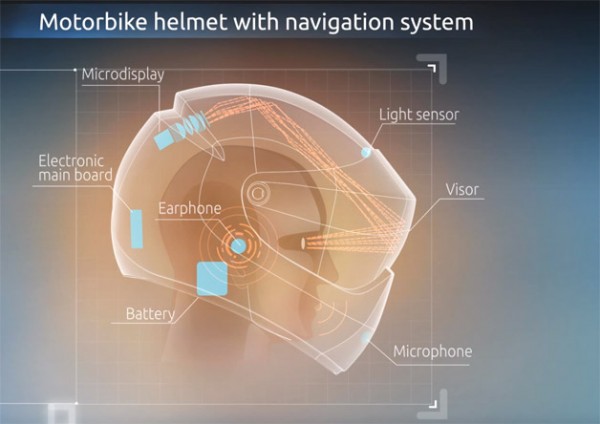 ‘$2000!’ I hear you shout. Yes, that’s right – at today’s exchange rates this translates to approximately £1295 and is pretty expensive by anyone’s standards.

So how does LiveMap justify such a hefty price tag?

Well, the helmet itself is absolutely brimming with technology and utilises a head-up display, together with a projector mounted into the shell of the helmet positioned behind the rider’s head. This, in conjunction with a number of strategically-placed mirrors, is able to beam a semi-translucent image in front of their head. If this was not enough, the helmet also comes equipped with Bluetooth functionality.

A marriage of technology and safety

The actual helmet does not forgo its primary function as a vital piece of safety equipment at the expense of technology. Indeed, the actual specifications of the helmet are fairly high, with a carbon fibre shell that meet all of the required safety standards for motorcycle helmets in both America and Europe.

LiveMap also says that if base funding target of $150,000 is exceeded by $350,000 to meet an admittedly optimistic $500,000, that the helmet could also integrate a video camera into its already impressive array of technological functions.

LiveMap has gone to great pains to stress that the graphical user interface beamed into the eyes of the rider will not interfere with their line of vision in any way. This is due to the minimalistic graphical appearance of the image when the motorcycle is in motion, which will not be distracting in any way.

In addition, the technological functions use an ingenious voice-recognition system that mean that one does need to use hands for any of its operations, which of course, is very convenient for safety reasons when the vehicle is in motion. When the motorcycle is stationary or moving at low speed, a more detailed map will be available to view.

Lisa Buckley, Marketing Manager at Carole Nash, commented: “Technology is becoming an unstoppable force across the globe. Over the past few years there have been a handful of exceptional developments in the biking space, key safety features have been unveiled, ensuring bikers are enjoying safer riding experiences, something which we are always keen to back.”

iTunes 10.5 beta 4 is now available for Windows and Mac