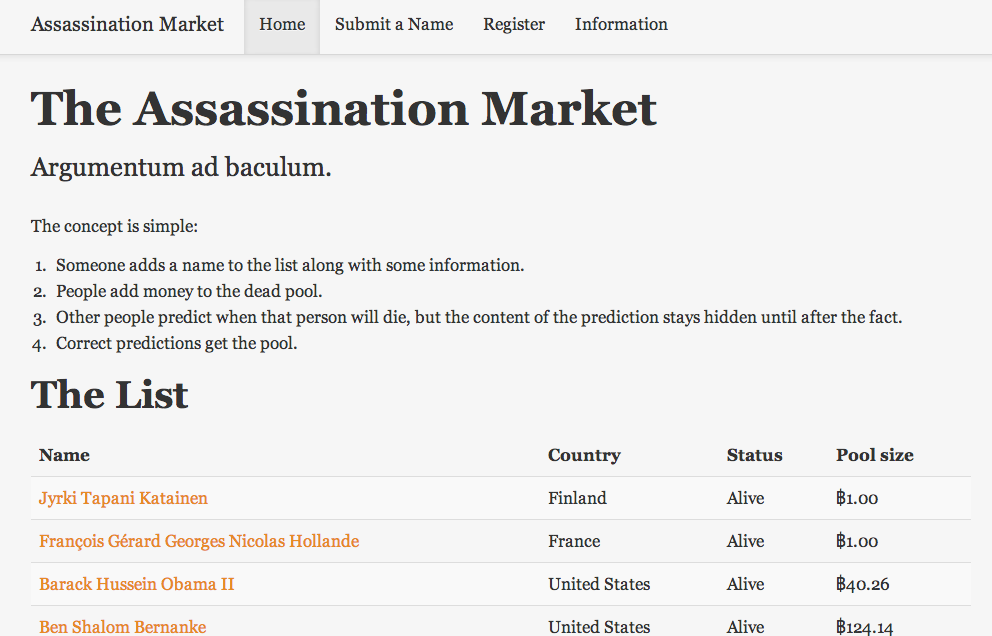 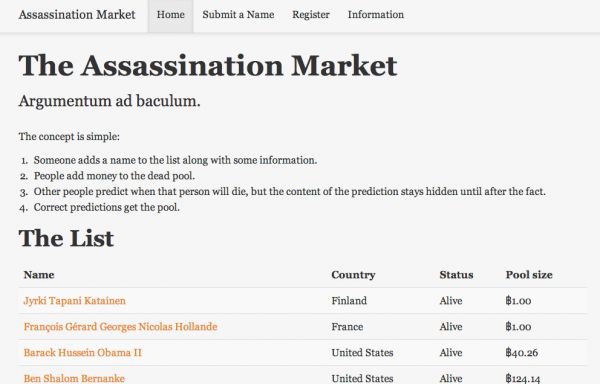 In 1903, the United States Congress passed an immigration act often referred to as the “Anarchist Exclusion Act”. While it contained a few other provisions, such as forbidding the immigration of epileptics and anyone running a prostitution ring, its main thrust was of course to keep out the anarchist “bomb throwers” that had both public and government highly concerned. This was later strengthened by the Immigration Act of 1918, and only repealed in 1952.

Okay, so what? Well, while anarchy as a political philosophy no longer has quite the cachet it did back around the turn of the twentieth century, its adherents still pop up from time to time Empowering the People by, say, trashing storefronts during an international trade conference.

Or by opening up an international, anonymous digital assassination market. An online “crypto-anarchist” going by the Kurosawa-film-inspired pseudonym of Kuwabatake Sanjuro has set up what he claims is a way to untraceably contribute to the demise of public figures in what amounts to a sort of murder-abetting death pool. The also allegedly untraceable crypto-currency Bitcoin is “laundered” (should the bettor take the website’s advice) and then put toward the mortal end of a given public figure. Some would-be assassin then plans the date of the murder, encrypts it using a one way “hash” operation, and attempts to carry out the killing. Should it succeed and match his or her submitted plan (decrypted with a key also provided by the contract killer), the accumulated bounty of bitcoin will be paid out.

That’s the theory, anyway. So far, the market has been up for four months and all of its intended targets remain hale and hearty. Six of them have been put up so far, the most prominent being US President Barack Obama, NSA Director Keith Alexander, and Federal Reserve Chairman Ben Bernanke (the list’s most-wanted at approximately a $75,000 price on his head). As a site on the “Dark Web”, the assassination market uses the fabled Tor anonymity service in the hopes of remaining out of reach of law enforcement, though this same precaution didn’t stop the bust of similar site (and Sanjuro inspiration) Silk Road, a cryptocurrency market notable largely for drug traffic.

The market’s founder “Sanjuro” hopes that this market, and perhaps others like it, will eventually make it nearly impossible to hold any kind of public office. Claiming to hold to only the most noble of intentions (minus of course his one percent personal take in the proceedings), he says the site will accept bounties only on those who have “initiated force against other humans”, because apparently anonymous death threats do not count as “initiating force”. His ultimate goal, in line with other anarchists, is to eventually abolish governments entirely and let the beautiful, humane fairy-magic of Laissez-Faire Land guarantee Utopia for everyone forever.

His claimed catalyst for finally developing this convoluted murder-for-money scheme were the various surveillance scandals spurred by government leakers such as Chelsea Manning and Edward Snowden. To judge by his own words from a conversation with Forbes journalist Andy Greenberg, Sanjuro is under the paranoid assumption that the US Government has the will and resources to listen in on and analyze every one of his own personal communications. While this is vanishingly unlikely anywhere but in his own solipsistic mind, the FBI would certainly have sufficient cause for a wiretap warrant at this point.

Of course, Sanjuro is not the first would-be revolutionary to attempt to inspire violence in furtherance of his improbable political goal, and he sadly will not be the last. What makes this particular effort so potentially dangerous is that power corrupts, and so, as even the most casual of Internet users generally discovers, so does anonymity. Sanjuro may believe himself and his compatriots immune to such corrupting influences because in their ideology it is only “government” that has the quasi-mystical ability to turn otherwise pure and lovely human nature into tyranny and oppression, but like all ideologues they are deluding themselves with a worldview too simplified to accurately model the unfathomably complex reality we actually live in.

No good has ever come from giving weapons to fanatics.

Daylight savings time alarm bug in iPhone and its fix