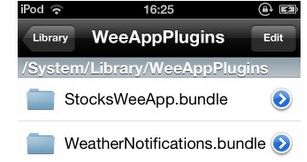 The new iOS 5 Jailbreak comes along with third party widgets in the Notification Center. Two widgets are added in it recently. These are:

Apple includes really good notification center of Android-Esque type as revealed when iOS 5 was shown on Word Wide Developers Conference 2011. But, unfortunately that concept didn’t work so good and it faced a number of complaints. Now, Apple has improved its new notification system to get back user’s attention. Eventually, all the credit goes to Mobile-Notifier and its developer Peter Hajas, who is still working in  Apple.

iOS 5 comes with reference like file system that is helpful for developers. Developers who want custom widgets with the help of references can create it easily. IOS 5 discovered reference include Wee-App-Plug-in folder. Moreover, widgets are supported which are shown in the Notification Center.  If the reference does not work, then, the solution of jailbreaking is always open.