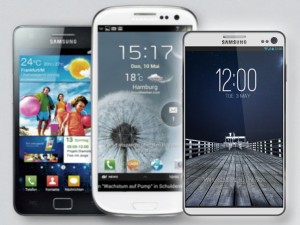 The Samsung Galaxy S3 has been a resounding success worldwide, overtaking the iPhone 4S in global sales in Q3 of 2012 and only being narrowly pipped to the post in Q4 by its successor, the iPhone 5. Obviously, the smartphone market is ever evolving, and constant innovation is needed to ensure that the leading manufacturers retain their market share. For Samsung to do this with the follow up to the S3 – presumably called the S4 – it will have to take everything that made its current best seller so successful and take it to the next level. So why was the Samsung Galaxy S3 such a hit?

Due to the fact that all of the components for the Galaxy series are built by Samsung, it is always able to offer cheaper prices than competitors. Currently, the 16GB S3 retails for £409.95 for just the phone, while the same size iPhone 5 is £529.00 for a similar spec. Clearly in times of recession, consumers want to get the best value for money, and it would seem at the moment that in the smartphone war, Samsung is offering it.

Apple is widely considered to be a closed shop for users when it comes to their hardware, whereas Samsung is much more open. This means that Galaxy owners can extend the memory of their device using a simple SD card, meaning that when the device’s on-board memory fills up, the user has an expansion option. Additionally, due to the ever-updating nature of the Android platform, many other manufacturers struggle to make their devices compatible with the latest version of the software. Due to the Exynos processors manufactured by Samsung itself, it is able to keep all devices up to date, and offer the best support possible as they know exactly how the processor works.

For many, iOS is too restrictive, only allowing users to do what Apple want them to do. Android is the main alternative to this, and Samsung’s take on the software is freer again, adding in features such as ‘Blocking Mode’ which is similar to Apple’s own ‘Do Not Disturb’ function. For those who like to tinker, the Galaxy range is also appealing as it is very developer-friendly, allowing enthusiasts to customise their device to suit their needs.

So, with the announcement date of Samsung’s new phone set for March 14th, what can we expect from the new phone, and how is it going to improve on the impressive S3? PC Pro claims that the new device will feature a full HD, 1920×1080-pixel display on a five-inch screen, while also packing in 2GB of RAM. The S3 was also famed for its fantastic battery life, so the pressure will be on to at least match this, if not improve on it further.

We should know more soon about what exactly the Galaxy S4 has in store for us, and whether or not it can beat the upcoming iPhone 6 into touch.

Is Enough Being Done To Teach Coding In Schools?

How to Set up multiple monitors