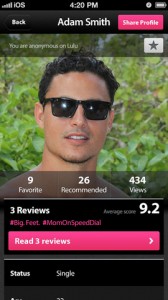 I was catching up with a childhood friend over coffee recently when he asked about my rating on Lulu. I gave a confused look as I had no clue what he was talking about. He went on to explain the iPhone app, gushing about his rating. Apparently he’s a 9.2 and a #GreatListener. You see, Lulu is a girls-only app for Apple (and android) phones that allows women *and only women* to log in through their Facebook accounts and anonymously rate the men in their lives with hashtags like #OwnsCrocs, #ManChild or #WritesLoveSongs.

Being a tech guy, I was a little surprised that I hadn’t yet heard of Lulu. However, the more my buddy explained to me the way it worked, the more reluctant I became to check my profile and rating on Lulu. He suggested I check right away. I refused, and the conversation drifted back to old times.

When I got home from our little male bonding session, I pulled out my phone and did a search for this man-rating app. After installing it, I sighed briefly in regret for even being interested and loaded up Lulu. A few introductory screens welcomed me, and I was asked to log in through my Facebook account. Surprise: the app told me, “Dude, you’re a dude,” and wouldn’t let me login. But it did suggest another app called Lulu Dude so I could check out how women rate me. 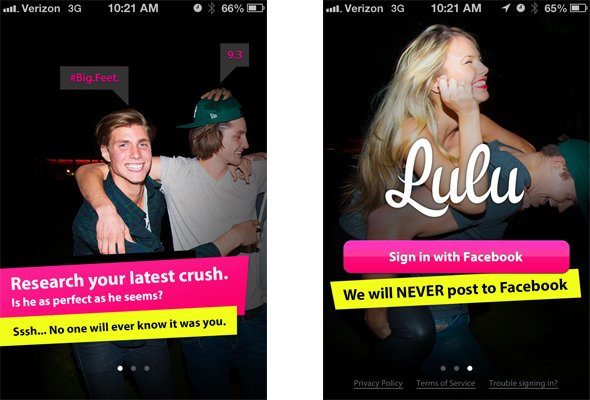 I put the phone down and did some self-pondering to determine if I really wanted to go down this rabbit hole. Instead, I hopped online and did a little research.

It seems one of the biggest issues people have with Lulu is that it comes across like an invasion of privacy to the men being rated. While truly personal information isn’t posted publicly, and women can’t actually post textual reviews of men –they can only use predetermined hashtags– men with low and average ratings can now plainly see what women think about them. Even worse is everyone else can also see why women don’t find them attractive. This could be a huge blow to a “dude” who likely already has confidence issues to begin with. On the other hand, attractive, wealthy men might get incredibly high ratings and that surely boosts already-high egos. 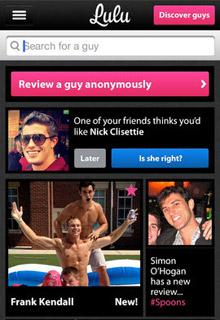 Even after spending far too much time researching a completely irrelevant smartphone app, I am still jaded on whether or not I want to load up Lulu Dude to check out my rating. In one situation, I would be devastated; in the other, I’d be mildly pleased.

Honestly, I see no benefit to knowing what women think of me or my Facebook profile. I already know I’m a catch who’s a #VideoGamer who #CanBuildIkeaFurniture, thank you very much.