Eventually Evolved from various phases and different designs of United States Thermo Nuclear Weapons, It is one of the efficient and destructive nuclear warhead with a blast yield of 9 Mega Ton using the parachute drop mechanism. It had five parachutes. It was intended as a bunker buster weapon, using a surface blast after lay down deployment to transmit a shock wave through the earth to collapse its target. A total of 340 were produced and was delivered to target by B-47 Strato-Jet, B-52 Strato Fortress and B-58 Hustler.

Another United States most deadly weapon with a blast yield of 25 Mega Ton tested in the year 1960, 500 of Bassoons were created in two years, during its operation, the Mk-41 was the most efficient known thermonuclear weapon in terms of yield to actual weight, with a 5.2 Megaton/ton ratio. The United State has claimed that its blast can yield up to 35 Mega Ton. It was carried only by theB-52 Stratofortress and B-47 Stratojet. It can be dropped, air burst or retarded. It is basically a type of fission-fusion-fission known by the term Thermo Nuclear Triple Threat.

Tsar Bomba one of the most powerful nuclear weapon ever built on earth also known as Kuzka’s Mother developed and detonated by Soviet Union in the year 1961. It was originally built to have a blast yield of 100 Mega Ton but later on in order to reduce the nuclear fallout the yield was reduced to 50 Mega Ton. A rough estimate gives an idea about its destruction i.e. 1400 times the destruction caused by Fat Man and Little Boy combined. The Tsar bomb was flown to its destination target by a Tu-95V release Plane accompanied by a Tu-16. The Tsar Bomb’s detonation test took on 30th October 1961, height of its mushroom cloud was 64 km and its fire ball was so high that it eventually reached the height of the release plane and could be easily seen from 1000 kilometers from Ground Zero. Thus Tsar bomba Is on the top ranking in our countdown list. It is justified to give him the name “King of the all Bombs”. 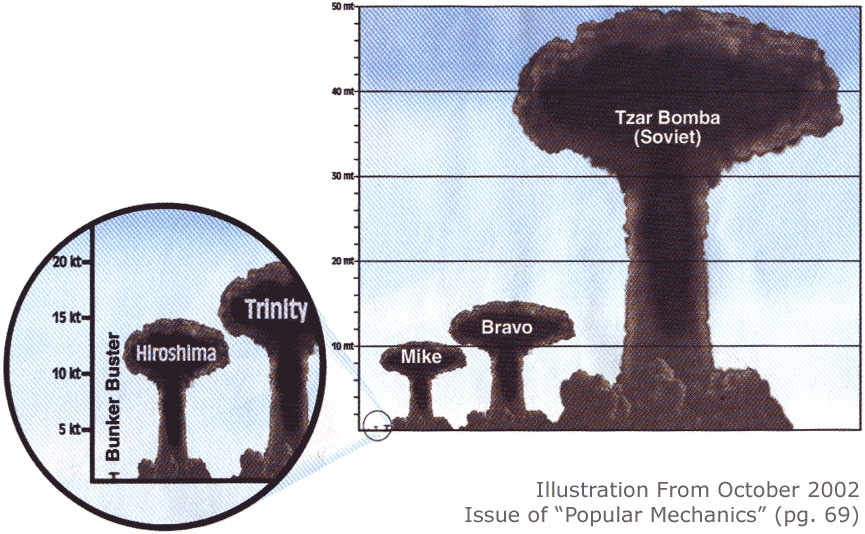