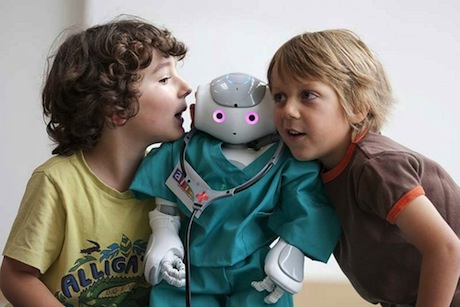 If you’ve ever spent time with an interactive robot, it’s always a novel experience at first — but over time the thrill will fade. Each time the robot meets you, it will run through a routine of canned responses that gets old pretty quickly.

But what if robots were able to remember who you are and retain information associated with you? It might make them better companions, and a step up from passive toys.

The ALIZ-E project is a European Commission-funded venture aimed at producing robots that can forge “longer-term constructive bonds” with people in a hospital setting. Grouping academic and commercial partners, it kicked off six months ago and will run for four and a half years.

It’s essentially an artificial intelligence effort. Aldebaran Robotics’ Nao humanoids, used in RoboCup and research centers around the world, will be interacting with and helping kids at the Hospital San Rafaelle in Milan. The children are about 8 years old, and have recently been diagnosed with diabetes.

The patients will be learning about diabetes and how to manage it during their hospitalization. The researchers, meanwhile, will see whether these robot caregivers can be as effective as pet therapy in hospitals, which can be expensive and pose hygiene issues. Other groups are exploring similar ideas using a robot seal called Paro.

The researchers are programming 20 Nao robots to work one-on-one with children and caregivers, and are focusing on cognitive abilities including natural language processing, child speech recognition, facial expression recognition, and episodic and semantic memory. The children will be evaluated on their knowledge of diabetes from training with Nao versus a nurse.

“If you use a chatbot, the chatbot really doesn’t understand what you are talking about,” says Belpaeme. “Here, we want the robot, upon hearing a proper name, say Fabio, to recall interaction history, images, and memories in general pertaining to Fabio.”

The Nao robots wouldn’t be able to store much information, so the researchers will use a cloud-based computer system for the heavy data processing. The robots will rely on this cloud infrastructure to process speech and non-verbal inputs, store a distributed model of long-term memory, and use that information to produce a more lifelike interaction.
The computing architecture for this will be GostaiNet from partner firm Gostai, a French start-up known for its open-source Urbi robotics platform. Urbi has been used in everything from Aibo robot dogs to Segway RMP platforms to Lego Mindstorms NXT kits.

The main innovation of Urbi is its script language, says Gostai CEO Jean-Christophe Baillie. “This language makes it much easier to handle complex parallel tasks and also to handle and process events, which are two essential parts of any robotic program,” he says. “Urbiscript is strongly coupled to C++ and other traditional languages, so it’s easy to integrate it within a project.”

Could more realistic human-robot interactions develop into relationships? Will children become attached to Nao? We’ll see how the sick kids take to robot’s bedside manner. In the future they might look back at Nao as the first of many robot doctors.