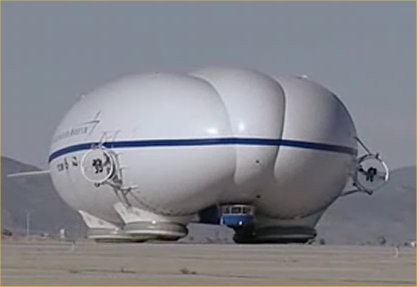 Lockheed Martin Advanced Development Projects is making perhaps the first realistic tests of a hybrid airship–a concept that dates back many decades but that is just now being tried at a significant scale. The Skunk Works had secretly built the craft and hoped for a quiet first flight at its Palmdale, Calif., facility, but a few passers-by noticed the strange object in the sky. The Defense Dept. is showing interest in two categories of airships–those that can carry large cargo at low altitude, exemplified by the Defense Advanced Research Projects Agency (Darpa) Walrus program, and those that can operate in high-altitude low-wind conditions and remain on station for long periods of time. The configuration of the Skunks Works ship indicates it is the former–a hybrid heavy-load carrier. The interest is across the services and the notional applications are diverse, ranging from logistics–delivery of an integrated fighting unit within theater, for example–to sensor, communications and even laser-weapon relay platforms. But airships aren’t there yet. Major unresolved issues could derail the airship dream, such as their traditional delicate ground handling, and possibly prohibitive economics and vulnerability. These issues have been debated endlessly on paper, and now Lockheed Martin, a prime airship proponent, is investing to seek real answers.

A hybrid airship derives most of its lift by being filled with a lighter-than-air gas such as helium. Overall, it is heavier than air and gains the final 20% or so of lift by flying like an aircraft, but with slow takeoff and landing speeds that allow operations from short unprepared strips. The Skunk Works made the first flight of its “P-791” testbed on Jan. 31 at its facility on the Palmdale Air Force Plant 42 airport. The manned flight was about a 5-min. circuit around the airport in the morning and appeared to be successful. The company did not announce or want to discuss the flight. The P-791 is not part of a government contract, but rather an independent research and development project by the Skunk Works to better understand airship capabilities and technologies, such as materials, a company official says. However, it may also be a quarter-scale prototype of a heavy-lifter.

TO GAIN MORE SPAN TO ACT LIKE a wing, the P-791 is three pressurized lobes joined together. An observer of the first flight says it was about the size of three Fuji blimps blended together. The Fuji blimp, a Skyship 600 model, is 206 ft. long. That suggests the P-791 would have a gross lift of roughly 3-5 tons. The observer saw the craft performing very tight 360-deg. turns while taxiing. It made a brief takeoff roll, climbed to a low altitude, made a few banks–including a long sweeping turn–then came back and landed. The landing approach had a nose-down body attitude that levelled for the flare. The flight was very smooth, the observer says. The craft was flown by P-791 Chief Test Pilot Eric P. Hansen. The speed of the testbed was estimated at about 20 kt. A full-scale version would be able to go much faster, over 100 kt. Lockheed Martin has long proposed a large transport airship, at one time called the Aerocraft, which was halted around 2000 (AW&ST Feb. 22, 1999, p. 26). That design was about 800 ft. long and was to carry 1-1.2 million lb. at 125 kt. The Skunk Works was one of two contractors to receive one-year, $3-million Darpa contracts in August 2005 to study Walrus. The second Walrus phase would be a three-year demonstration effort.

How to Configure Windows Mobile 6.5?