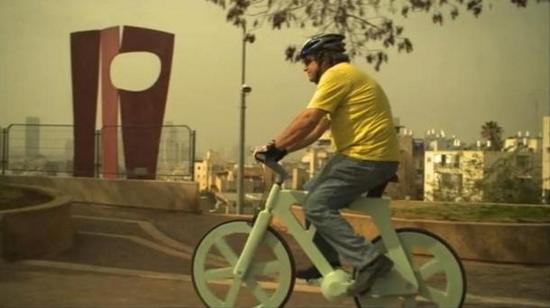 This is the story of the man who build a fully functional bicycle from cardboard. His inspiration came from Cardboard boats. So he started making his bike from card board. The name of the person is Kariv and the total cardboard bike costed him $9.

After inspiring by the cardboard idea, Kariv asked many engineers about implementing this idea on bicycles, but all of them told him that it was impossible. The determinant man took some cardboard pieces and started building bike on his own. After some failures, he succeeded. The bicycle he made is as smooth as the conventional bicycle, and it can withstand the weight of a person upto 308 pounds. He folded the cardboard like origami for strength and added a coating to defend it from the elements.

Well Kari still thinks that this types of bikes can be sold in stores for $60 and they can be modified in a number of different ways. Take a look at the details of the bike below

Programmable Shirts Uses Your iPhone To Show Tweets And Pictures