For anyone who has ever had to write any type of paper for school, you’ll likely think of Wikipedia as a savor, that is assuming you don’t have to cite your sources. However, Wikipedia offers more than statistical data and useful information. Instead, Wikipedia also has a bevy of downright weird articles that show how truly interesting some things on earth are. It’s difficult to narrow down, but here are the 10 weirdest Wikipedia articles you can find.

The Hole
The Church of Scientology is accustomed to being known for its own share of criticism. Despite having a load of celebrities who are on board with their preaching’s, the overall idea of their religion is debated by many. However, what you may be more surprised to hear about is a place called The Hole. This is considered to be a prison-like setup in California where members of the church are taking to confess there sins. Just reading the Wiki page will give you a creepy insight into the things the church puts some of its members through.

Love Land
Spreading love is a good thing in most parts of the world. South Korea takes this concept to the next love-el on the Island of Jeju. Here you can find a place called Love Land, which is a park that is dedicated to sex. What started as a popular honeymoon destination for Koreans, has turned into a popular tourist destination for those looking to expand their horizons human lovemaking.

Nation of Celestial Space
With the way technology is going, it could only be a matter of time before humans start living in outer space. But before we do, we’ll have to make sure that it’s okay with whoever is left in the family of James Thomas Mangan. In 1949, Mangan claimed outer space on behalf of humanity.

Micronations
What’s better than starting a new life in outer space? How about starting a new life here on earth, where it’s a bit more logical for the time being? Micronations is a Wiki page that will show you a list of small places on earth that have claimed independence. The reasons vary, but the idea is intriguing.

Pizza Farm
Who doesn’t love pizza? Whether you are a college kid on a budget or a family looking to feed everyone in your house, pizza is a great choice for dinner. And in most cases, lunch and breakfast too. Either way, the Pizza Farm Wikipedia page is dedicated to telling people where they can find pizza farms. While two of them are in the U.S., a new one has been made in York, United Kingdom.

I-80
If the thought of a pizza farm made you get in your car and start cross-country, don’t get lost as your traveling through Wyoming. For a one-mile stretch, Interstate 80 connects into downtown Cheyenne. However, the interstate is not up to required regulations and, therefore, is not considered a real interstate.

Worlds Littlest Skyscraper
The Newby-McMahon Building has been around for nearly a century. Built during the oil boom in the 1920’s, this building has only one room on each of its four stories. While the building may have been considered an atypical monument in its day, it’s nothing compared to the buildings we have around the world now. 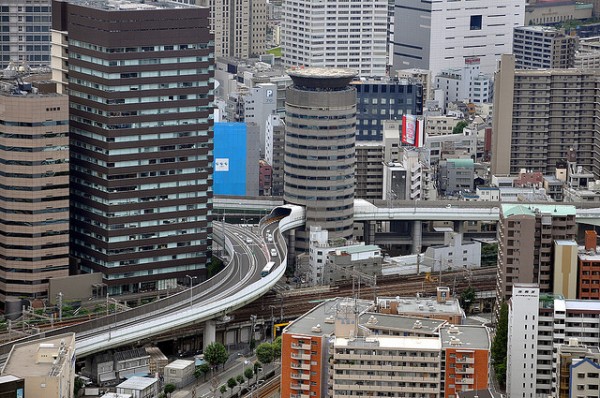 Speaking of which, the worlds littlest skyscraper is nothing in comparison to the Gate Tower Building. This building in Osaka has a highway that runs through it, making it quite the site from the sky. The building is nicknamed the “beehive because of how it looks and because of the traffic, literal and figurative, that passes through it.

JASON Reactor
Nuclear weapons are serious and scary business. So it only makes sense that humans decided to put them in old buildings that probably can’t handle their massive power. The JASON reactor was built in a 17th century building in Greenwich, London. The reactor was dismantled in 1999, but the site remains a World Heritage Site.

Dagen H
There are a lot of bad drivers throughout this world. Some of this may have something to do with Sweden. On September 3, 1967, Sweden passed a law on Dagen H Day, making all drivers switch from the left side of the road to the right. The Wiki page shows a complete mess of drivers running into each other as they try and figure out the right place to be.

Wikipedia is a beautiful and growing place to find knowledge. Each day, more and more articles are submitted to expand humans further knowledge. But not all of that knowledge has to be completely useful for scholarly articles. It’s articles like those on this list that make you realize what a unique world we truly live in.