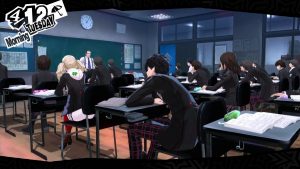 Persona 5 is a Japanese role playing video game (JRPG) for the Playstation 4 console. The game was developed by Atlus and directed by Katsuna Hashino. It features a high school student who also leads a vigilante group known as the Phantom Thieves. He must attend high school and deal with all sorts of relationships and problems that an average teenager would have. In addition to this, he must face evil forces in an alternate dimension together with his vigilante group. It is in this dimension where their inner identities (Personas) are really exposed and explored.