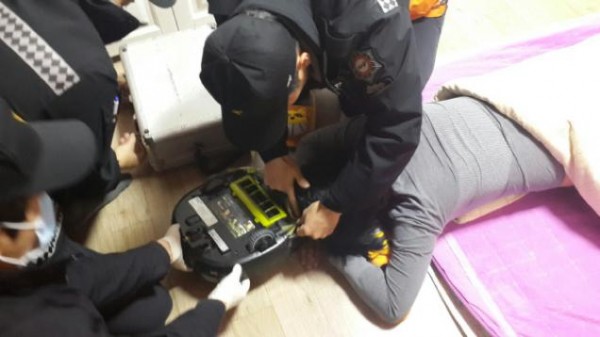 If you haven’t noticed, many tech companies are now looking to invest in robotics, and have them placed in many homes across the world to make life easier. While some people have already accepted the thought of having a robot in their home and think of them as being user-friendly, there are others that are still quick to disregard this and dismiss the idea of having them around our loved ones doing chores and helping out to take care of our little children. This recently reported story may be the very reason why people still have a bad idea about robots. Thankfully this robot owner was able to make it through her bad experience. The robot however did not.

A South Korean newspaper Kyunghyang Shinmun (via tipster Sang) recently published that earlier this month, the fire department was contacted by a 52 year-old woman who had reported that a Roomba-like vacuum cleaner had hoovered up her hair. From an image that was taken, it was assumed that the woman was lounging on the floor when the incident occurred.

According to the paper, the woman was home alone when her hair was sucked up by the robo-cleaner. She then sought help by calling the fire department’s 119 number, and a team of firefighters arrived at the scene to offer their assistance. In order to free the woman from the vacuum cleaner, they had to dismantle it. Thankfully she was not injured.

Let us hope another case like this doesn’t happen again, or else robotics could slowly lose its futurity.