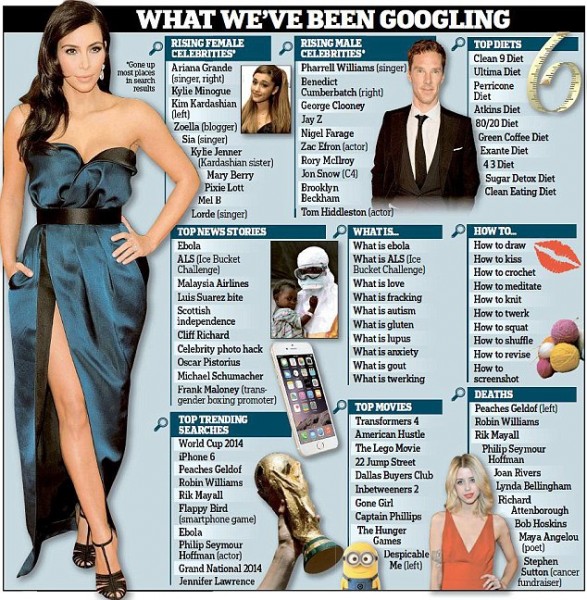 This year 2014 was flooded with tons of amazing events, not to mention the soccer World Cup that has already taken the crown for the most searched for term on Yahoo, Facebook and Twitter, and now topping the charts on Google’s Year In Search review. On the annual list, celebrities such as Beyonce, and the death of Peaches Geldof also proved popular.

The results gathered are based on the most popular search terms over the past 12 months in the UK, within various categories. 2014 reigned as the year of sports in Britain with the World Cup, Grand National, Wimbledon and Luis Suarez dominating as as the top 10 trending and news stories. The most topical and most ‘What is…?’ search of the year slot was taken by the virus Ebola. On the list of the most searched for consumer gadget, Samsung’s Galaxy S5 and the Nexus 6 made the chart, with Apple’s iPhone 6 in the lead. It was also the most searched tech term in the UK, ahead of Google and Youtube.

Other top questions were ‘Who is Banksy?’, ‘What is Dappy?’ and ‘Where is Honduras?’.

On the celebrities list, Ariana Grande stood as the rising female star of the year, in terms of search volume, while Pharrell Williams as her male counterpart. The list of the most searched for male celebs of the year was topped by Ed Sheeran.

According to the searches, Paris and Italy were the most popular holidaying destinations of the year. and the on-trend foods of the year were chocolate cake and burgers. Thanks to social media, charitable causes such as the ALS Ice Bucket Challenge, and the No Makeup Selfie.

Stephen Rosenthal from Google UK said, “Google’s Year in Search gives us the best snapshot of what moved, inspired, shocked and intrigued us in 2014.” 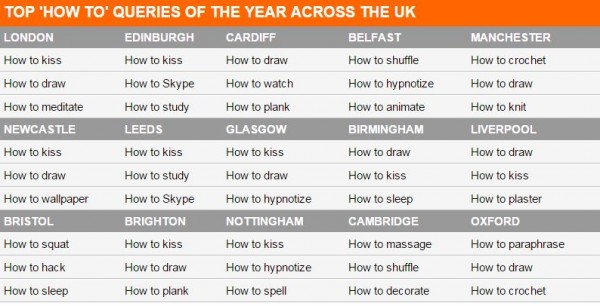 The ‘How to…’ searches in the UK revealed that many people wanted to learn how to kiss. In the battle of TV Shows, children’s favourite, Peppa Pig stood at #1 while others such as Eastenders, Coronation Street, and X Factor followed.

Google’s Year In Search review was previously called Zeitgeist. Global search results are expected to be released today, the 16th of December.