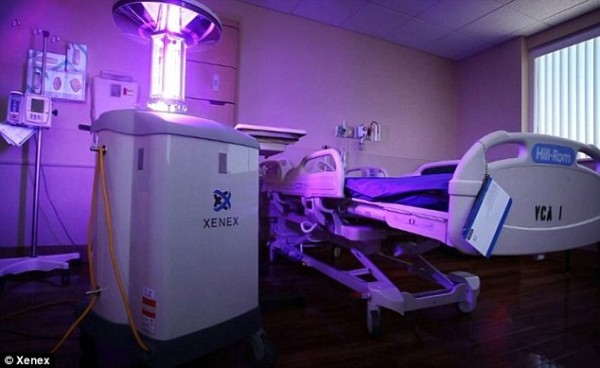 Although the deadly virus Ebola is circulating all over the World, 250 hospitals and health facilities across the US currently possess a germ-killing robot that is designed to rid a room of the viral DNA using pulses of ultraviolet light. The robot designed by San Antonia-based Xenex called “Little Moe” uses a non-toxic gas called Xenon to create ultra-violet rays that will destroy the Ebola . It is transported from room to room rolling on its four wheels. 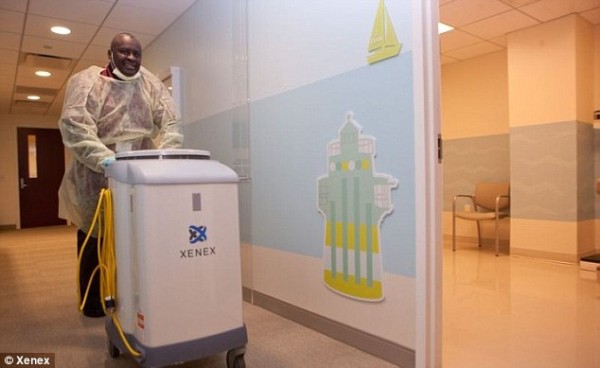 When the machine is in operation, it blasts 1.5 pulses of light that is 25,000 times brighter than sunlight every second. This light is flashed up to ten feet (three metres) in every direction.

The spokesperson for Xenex said, “Our robot ensures the room is safe for the next patient by destroying germs on high-touch surfaces, and in hard to clean nooks and crannies.”

Unlike other diseases such as superbugs that mutate and become immune to disinfections, the Ebola virus on any surface is easily destroy in just two minutes with the flash of the UV rays.

While the technology has been in existence from decades ago, Little Moe replaces the mercury that is usually used with xenon to speed up the process of sterilizing rooms. A mercury-based UV machine in comparison would take up to an hour to sanitize a room.

“Our mission has always been to eliminate the pathogens that cause the infections that impact the health and lives of millions of patients and their families, and Ebola is no different,” Xenex stated.