If you are familiar with hamster wheels then you already know where this story is heading. In a world where creativity is no longer hampered by financial resources thanks to crowd funding websites, entrepreneurs are unleashing their imagination on the world. One such example is the new Kickstarter project designed as a fitness regimen for cats. 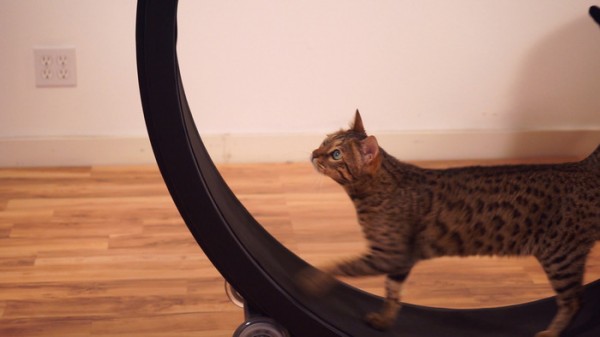 Sean Farley turned to the crowd funding website in order to raise money for the “One Fast Cat” exercise wheel.

“House cats possess a natural hunting instinct, and this product helps them expend that pent-up energy,” states Farley. He further explained that it is important for cats to release this energy so as to prevent psychological problems such as depression. Generally, domestic cats have very little do besides hunting the occasional mice and playing with toys bought by their master. It stands to reason that such an equipment would be a great addition to a cat’s collection of activities.

The campaign has been a success raising over US$130,000 more than 1000%  its initial goal of US$10,000. Backers can pledge as little as US$1.00 for an electronic thank you and project updates. A pledge of US$549 secures the ultimate incentive of three cat wheels in colors of your choice. The project ends on Thursday, August 7 with shipping commencing as early as September.