A Swedish underwater exploration team called OceanX discovered something odd in the ocean, jokingly calling it a UFO. On closer inspection though, it kind of looked like the Millennium Falcon. Using side-scan sonar, the object was discovered to be 60 meters in diameter, with a “rigid tail 400 meters long.” 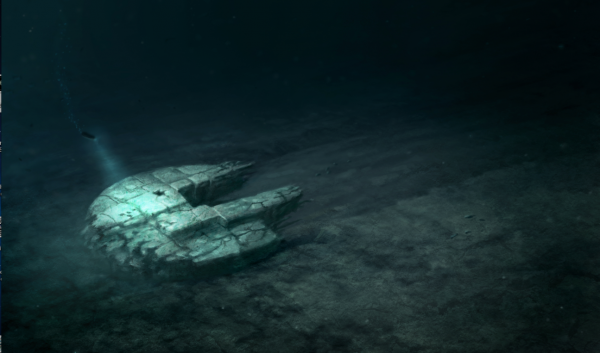 OceanX diver Stefan Hogeborn, despite a 20-year career spent exploring the undersea world, said he had “never seen anything like this” and that it was “the strangest thing I have ever experienced as a professional diver.”

First they thought it was just stone or a rock cliff, but after further observations the object appeared more as a huge mushroom, rising 3-4 meters/10-13 feet from the seabed, with rounded sides and rugged edges. The object had an egg-shaped hole leading into it from the top, as an opening. On top of the object they also found strange stone circle formations, almost looking like small fireplaces. The stones were covered in something resembling soot.

Now, thanks to more exploration and a laboratory analysis of stones on and around the object, they’re a step closer to lifting the veil on the mystery. The stones that lay on the object turned out to be red granite which came with the ice age. Ocean X Team member Dennis Åsberg’s theory is when the ice melted, the stones landed on the object. That would mean it should have been there more than 140 000 years.