Elon Musk, founder of Tesla and Paypal, released his proposed near-supersonic “Hyperloop” transport concept.  The solar powered system could reach speeds of up to 800mph, Elon claimed. It would provide a faster safer and cheaper alternative to flying or train travel. The system resembles the pneumatic tube system used to move document capsules today in older buildings. But it will push humans at great speeds, connecting LA and San Francisco in 30 minutes, Elon said. A trip between the two cities would cost only $20. Musk estimated the system linking the two cities, which are 380 miles apart, would cost $6bn.

Capsules could depart as often as every 30 seconds and could also carry personal automobiles,it would be built as an elevated rail alongside current highways, which would enable it to be constructed with minimal disputes over land rights, Mr Musk said. The tube and supporting columns would be designed to withstand earthquakes.

While the promise of near supersonic land travel sounds enticing, the project is only at the idea stage, with Musk saying it would take up to four years to build a prototype. He has released the plans as open source, so that anyone can pick up on this idea and modify it.

So is this the long distance transport mode of the future? We are still a ways off, and while the idea has its advantages it will still need major backers and public support – Musk said he does not plan to devote much time to the project over the next few years, as he is busy with his other ventures. 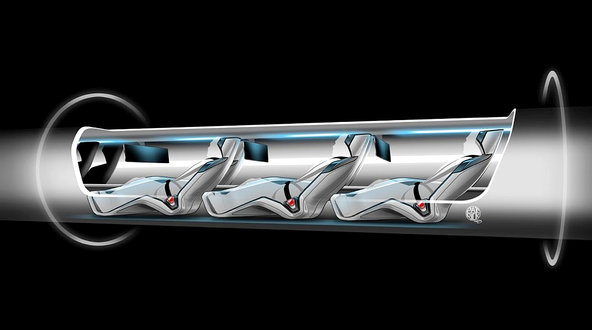