Two impediments to wider acceptance of electric cars have been their cost and their short driving range. Start-up company Envia Systems may have solved both issues with the development of their new energy-dense battery. Although the technology is in the early stages, the battery has shown enough promise that GM has invested in its development. 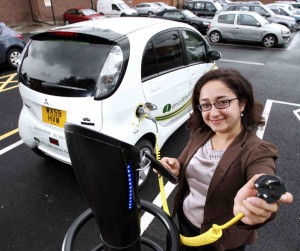 Current batteries in electric cars vary widely in their range. At the low end of the mileage spectrum is the Chevy Volt, which can travel about 35 miles on a single charge. At the top end is the Tesla Model S, which has a 300 mile range. In the middle are the all-electric Ford Focus and Nissan Leaf, which get 70-100 miles on a charge.

Envia’s research is based on materials developed by Argonne National Laboratory. The Envia high-density battery will store about 400 watt-hours of power in a kilogram of battery. What this means for the electric car is a potential range of up to 200 miles per charge.

Four years ago, automobile lithium-ion batteries cost around $1,000 per kilowatt-hour to produce. Prices have been slowly decreasing as the batteries become more widely used. Nissan predicts that kilowatt-hour prices may drop to around $400 in the next several years. In the meantime, the battery pack is a huge part of the higher price of electric cars. The base model Tesla S has a range of 265 miles. It also has a starting price of $69,900. The enhanced 300-mile model starts at over $100,000.

Envia and GM believe the new battery will be significantly cheaper to produce. The target price is $125 per kilowatt-hour. If they are successful, the battery’s cost will be similar to the price of gasoline-powered engine batteries. Envia believes the low cost of their battery will translate into a $25,000 car that has a 200 mile range. A vehicle with a 300 mile range is expected to cost around $35,000.

Preliminary testing of the Envia battery has confirmed 378 to 418 watt-hours per kilogram of energy density. This is a huge improvement over batteries currently in use. Conventional auto batteries are rated at about 200 Wh/kg. The Leaf’s battery has a rating of 79 Wh/kg and Tesla’s high-end battery is rated at 121 Wh/kg,

The initial testing was conducted by the Naval Surface Warfare Center in Indiana. If further research yields similar results, GM hopes to have the battery ready for use in vehicles in two to four years. It is likely that field testing would take place before the battery was widely available to consumers, however.

More information about Envia’s work and their relationship with Argonne National Laboratories is available on YouTube.com. Consumers interested in comparing prices on new or used cars can visit the TrueCar Channel on YouTube.com. If all goes as planned, consumers will be able to purchase economical electric cars with Envia batteries in just a few short years.