We all would be familiar with this little creature which creeps so slowly and having a hard shell at its back often found in the gardens and on plants. Well, we Humans have finally figured out something positive from them as well other than creeping and amusing children 🙂

Scientists at the Clarkson University in Potsdam, New York want to extract electricity from their blood after they have been implanted with biofuel cells. According to Evgeny Katz, the leading scientist of that team shared that the electricity is extracted from the glucose and oxygen in the snail’s blood. All they do is attach their electrodes to it and extract the power from it. This could be brought to a huge scale as the power generation likely from this source would be amazingly a new dimension. 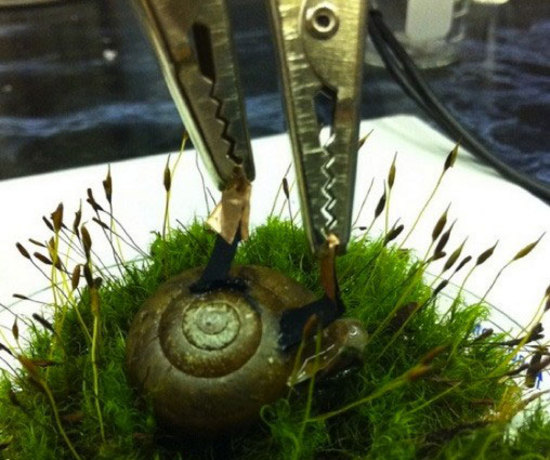 People loving nature don’t get worried as according to scientist their would be no harm to these snails as they love to get feed and move. Now the question is, will there be farms of snails in coming future to extract energy out of their blood or will the scientist go for some huge snails breed and use them? According to Katz they would be probably preferring some bigger animals for their research in the future. Lets just hope for the best and wish them best of luck for their future researches on scaling out whole new dimension of electricity production.