Data from Localytics, mobile app analytics firm, claims the Verizon iPhone 4 now accounts for 32.3% of the U.S. iPhone market share. Steady climbing has also been observed in case of the CDMA version of the iPhone since its launch, while the AT&T iPhone has apparently declined. 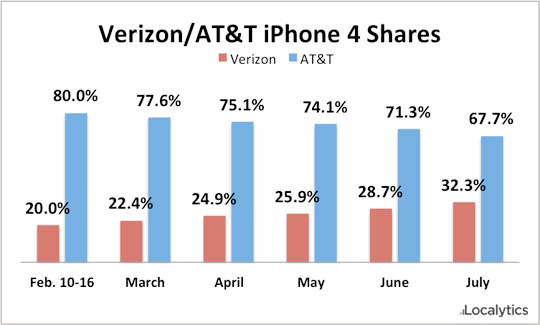 Verizon during its Q2 earnings conference call confirmed that it activated 2.2 million iPhones in the first few months after launch. The debut of the iPhone 4 was the most successful handset launch in the carrier’s history.

This rise has been attributed by Localytics to Verizon’s unlimited data plan, a feature the company ironically discontinued this week. It will be attention-grabbing to see if this trend continues in July and August now that the unlimited plan is no more available. It’s also very much possible the rumored fall launch of the iPhone 5 may slow the uptake rate of the fourth generation handset.