It appears that iPhone passcodes are only good for making your significant other suspicious about the contents of your phone, because as per a study by an iPhone app developer, the most common passcodes are extremely easy to guess. iOS wizard Danial Amitay analyzed 204,508 passcodes and established that “1234” is by far the most popular passcode, followed by “0000” and “0258” in a tight race for second and third respectively. 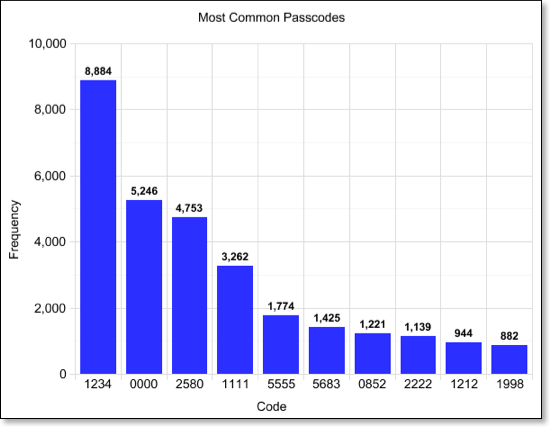 The figures strongly correspond with the most popular passwords on the internet–“123456” wins that contest. The results also aren’t totally surprising keeping in mind iPhone users’ understandable need for speed when unlocking the phone.

Rumor has it that iPhone developers are aware of the problem and are testing a gesture-based lock screen for the iPhone 5. But why not just make it exactly like the Department of Homeland Security and go straight for an iris scan?