It may not be a shiny gold inverted-V that clips to your shirt (or if you’re Ferengi, inside one of your capacious earlobes) but a new underwater translator could soon allow divers to make sense of dolphin sounds, and here’s the shocker: even speak back in crude dolphin-ese. 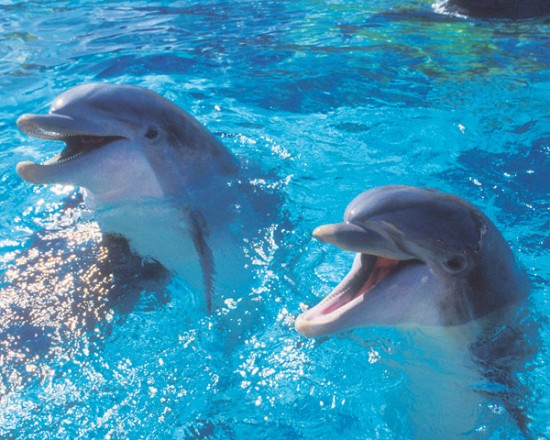 Science fiction often obsesses over how we’d chat with aliens, but we take for granted the fact that we can’t even comment about the weather to our fellow nonhuman Planet Earth-ers. Sure, we can teach a few words or tricks, and there’s certainly the body language angle—when my dog paws at the door, I know he’s not commenting on the off-white paint job or contemporary architecture—but as two-way head-to-heads go, it’s pretty much a one-way street.

That could all be about to change courtesy a couple conversation-obsessed scientists—including one versed in artificial intelligence research—collaborating on a project dubbed Cetacean Hearing and Telemetry, or CHAT. Their goal? To partner with dolphins and “co-create” a language both humans and dolphins can understand, allowing each to communicate with the other naturally.

Here’s how it works: divers will have computers and “twiddlers” (think underwater mouse-keyboard) as well as hydrophones (to pick up dolphin sounds) and special LEDs in their masks to indicate which direction a dolphin sound came from. When they start testing this summer, they’ll basically be learning and cataloguing sounds, from which pattern detection software–it’s hoped–will be able to identify the grammatical building blocks of dolphin-ese, be that word or signal based.