Sikorsky video of the Sep. 15, 2010 test flight during which its X2 Technology coaxial-rotor helicopter demonstrator achieved its 250kt speed goal. Conventional helicopters cruise at around 150kt. The X2 reached 260kt in a shallow dive as is expected to exceed 250kt in level flight once a sail fairing is fitted between the upper and lower rotors to reduce drag further. 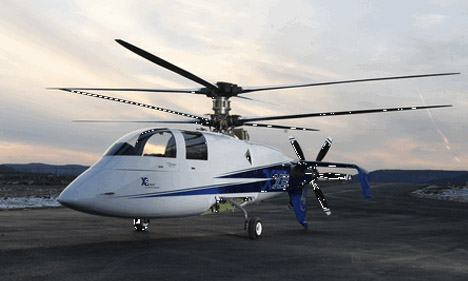 X2 uses a single T800 engine to power both the rotors and the tail-mounted variable-pitch propeller, which provides forward thrust to enable the high speed. Other technologies include fly-by-wire flight controls and active vibration control. As the video opens you see a full-scale mockup of Sikorsky’s proposed X2 Light Tactical Helicopter in the hangar.