Often termed as the best sniper gun of 2010, the L115A3, fires a heavier bullet to much longer ranges and has a state-of-the-art telescopic sight with twice the magnifying power of the old version. More than 500 are on order from the British manufacturers, Accuracy International.

Since British forces moved into Helmand Province two years ago to take on the Taliban, demand for snipers has soared and 120 a year are now passing through the specialist training school at Warminster in Wiltshire.
One said: “It’s a huge step forward. I’ll be using the new rifle in Afghanistan this summer.

“It’s a little heavier to carry, but the extra power is worth it. The improved telescopic sight can cut through the heat haze, which was preventing us from spotting targets at longer ranges.” 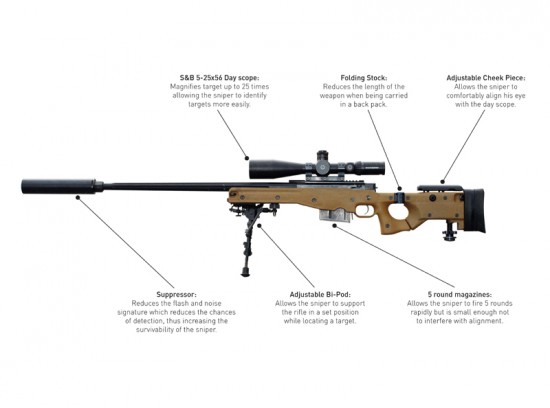 Sniping is proving a hugely-important tactic in Afghanistan, where the difficulty of fighting among maze-like compounds and thick vegetation necessitates attacking the enemy at long range.

The controversy over so-called “collateral damage” from devastating airstrikes killing innocent civilians adds to the advantages of a pinpoint attack. 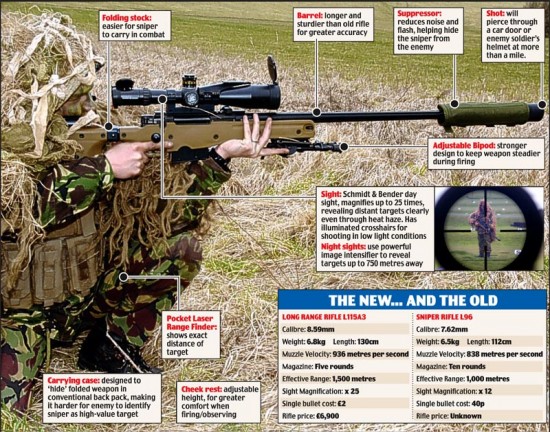 A senior officer at the Weapons Support School in Warminster said: “With the new rifle we now expect to be able to engage a target at 1,500 metres. With the old version it was about 1,000 metres.
“That makes a massive difference. You can keep the enemy at arm’s length with snipers. Or you can have several of them firing simultaneously.

“It is devastating for an enemy’s morale if a number of their fighters are suddenly shot at the same instant, and they can’t even see where the firing is coming from. They tend to withdraw fast.”

Training an infantryman to become a sniper can take up to a year, and only the most talented soldiers are allowed even to start the demanding courses.

First a candidate must master the technical aspects of shooting, learning to judge the strength of the wind extremely accurately using a variety of clues, and to adjust aim accordingly.

Just as importantly a sniper must learn to track his prey, move into position with extreme stealth, camouflage himself perfectly whether in natural cover or a battle-scarred city, and then disappear just as stealthily.

The senior officer said: “There is a long waiting list. Battalions are desperate to send soldiers here for training, and every soldier wants to be a sniper.

“They’re held in extremely high regard. This new rifle will make them even more effective.”