The first Iranian ‘human-like’ robot is seen at a conference centre in Tehran. Iran has developed the walking robot to use it for “sensitive jobs”.

Surena-2, named after an ancient Persian warrior, was unveiled by President Mahmoud Ahmadinejad on Saturday. It is 1.45 metres (4.7 feet) tall and weighs 45 kilograms (99 pounds), the report said.
“Walking slowly like human beings with regular arm and leg movements are among its characteristics,” it said. “Such robots are designed and developed to be used in sensitive and difficult jobs on behalf of a person or as help.” 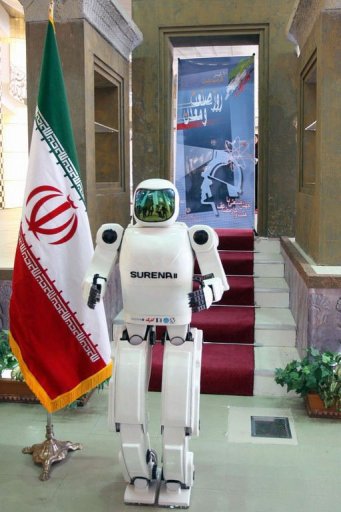 The report did not elaborate on the robot’s capabilities.
Iran has pursued a number of scientific projects in recent years such as cloning, stem cell research and satellite technology while it has come under increasing international pressure over its controversial nuclear programme.

Internationally, this is not the first robot of its kind. Honda developed ASIMO long ago