The researchers have combined this “shear-thickening” liquid with Kevlar to create a new bullet-proof material. The company is keeping the chemical formula of the liquid a secret, but it works by absorbing the force of the bullet strike and responding to it by becoming much thicker and more sticky. The BAE scientists describe it as “bullet-proof custard”.

“It’s very similar to custard in the sense that the molecules lock together when it’s struck,” explained Stewart Penny, business development manager in charge of materials development at the company. 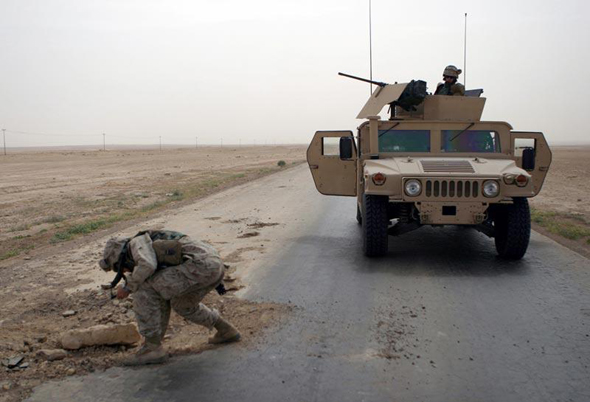 Shear-thickening liquids are not new to military research. The US Army Research Laboratories has carried out tests using similar liquids. But, according to BAE, these latest tests provide the first clear evidence that liquid armour could effectively protect soldiers from bullets or shrapnel. They say the liquid could ultimately be used to make much lighter, more flexible and more effective bullet-proof vests for solidiers.

In the tests, scientists used a large gas gun to fire ball bearing-shaped metal bullets at over 300 metres per second into two test materials – 31 layers of untreated kevlar and 10 layers of kevlar combined with the shear-thickening liquid.

“The Kevlar with the liquid works much faster and the impact isn’t anything like as deep,” he explained.

The results were presented to journalists during a preview of future defence technology at BAE’s Advanced Technology Centre in Filton, Bristol.