I don’t know about you guys but I will not be thrilled about gadgets capable of offering 3D videos and images as long as I will have to wear those 3D glasses. I’d rather watch 2D content instead of dealing with a possible headache. Luckily for me 3M is already thinking about such a 3D experience. Unfortunately 3M’s new ideas concern mobile 3D for now but if successful they might be used with larger displays in the future.

What 3M has done is use a new optical film which is mounted within the mobile’s backlighting unit. There it will use two distinct rows of LED lights which will project left and right images into our eyes. That means we don’t need glasses to enjoy 3D images on our future smartphones. And if we are to believe Erik Jostes, LCD business director of 3M’s Optical Systems Division, this new technology will not sacrifice screen brightness or resolution in the process. In fact it will even let you switch from 3D mode to 2D and back whenever you want without influencing display quality. 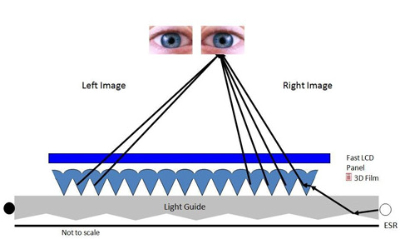 The new technology is apparently available right now for handsets and handhelds only. 3M’s 3D concept can be used on displays up to 9-inches as long as they are running at 120Hz. The high refresh rate is needed for 3D videos. The 3D film can be integrated easily into the backlight module which means that our future smartphones, PMPs, tablets and netbooks might come with 3D capabilities on board sooner than expected.

The 3D film will be displayed at the Korea Electronics Show next week and we shall see if it manages to impress handsets manufacturers. According to 3M there is one phone already using this 3D technology and it the product should be available by the end of the year. Unfortunately the name of the device hasn’t been revealed yet to the public.

Now that we have a solution for getting 3D content to our smartphones, we have to question ourselves if we really need 3D content on our phones in the first place. After all why not watch 3D movies and play 3D games on larger 3D displays and use our phone for regular daily chores that don’t require the use of any 3D technology?

3D projections are already showing maturity as shown in video below, and time is not far away when we will soon see 3D mobiles in our hands.