William Mitchell and Ryan Chin propose an attractive alternative to the carbon-belching, gas-guzzling autos clogging our thoroughfares, a vision that is as much about transforming cities as about remaking cars. The City Car, a tiny, electric-powered, foldable, stackable vehicle, is their solution to freeing urban centers of paralyzing, polluting traffic, and the nightmare of parking.

Along with a tiny footprint and lack of tailpipe emissions, the City Car comes equipped with an onboard operating system that allows the car to communicate with the rest of the fleet, and omni-directional robot wheels that turn (all the way around) on a dime. Chin enthuses about the car as a “highly personalizable, customizable thing,” whose intelligence will allow it to be ergonomically configured for each driver, and whose exterior may reflect the color or even political preferences of the driver through organic LEDs.

The principle behind the car is shared use – a ride you can grab where and when you need it, especially useful for that last leg of a commute. Mitchell describes stacks of these cars stationed at the most useful points around a city, wherever you need mobility. Swipe a credit card, pick up your ride, and drop it off at your destination. Says Mitchell, “It’s like having valet parking everywhere, except you don’t have a 17-year-old who’s going to drive your car at high speed…”

City Cars “make much more efficient use of urban infrastructure,” says Mitchell. Regular cars sit around 80% of the time, “burning up expensive urban real estate.” More than 500 City Cars could be parked around a city block. On the road, these cars are much friendlier to pedestrians and bicyclists than SUVs. Mitchell envisions far fewer road deaths in a City Car future. 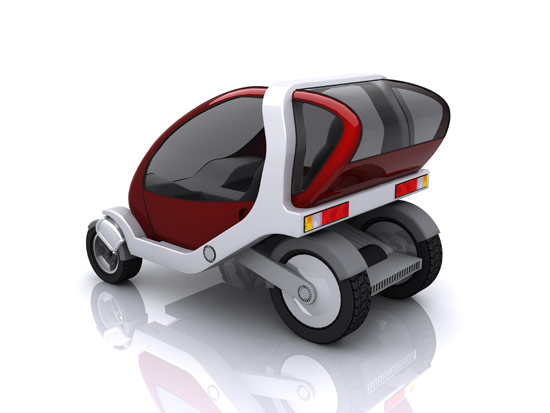 Mitchell believes the City Car could “change the auto business from what it is now, a low margin, commodity product business, to an innovative service business.” Think Google rather than Ford. Shared use vehicles could also drive a “dynamic new energy market, compatible with clean, intermittent energy sources,” charging up when the sun shines and sending unused battery capacity to the grid.

Mitchell demonstrates his grand ambition with images of Florence, Italy. Today, “all the centers of humanism in Florence are actually parking lots.” With rows of City Cars in underground lots, “we give the piazzas back to the people.” Theory has shifted into practice, as City Car-like scooters head for Milan and to Taipei, where they will be stationed at convenience stores that dot the city.

Here is the full video.

Some challenges stand in the way of shared use vehicles taking our cities by storm: Regulations and politics must align to support this complement to public transportation; and consumers in large numbers must be persuaded to give up private car ownership. “What I want is a clean, perfectly maintained vehicle at my disposal when I need it, perfectly reliable, preheated, pre-cooled when I get into it,” says Mitchell. “Why on earth would you want to own a motor car?”